What Characterizes a Good Cause and Effect Essay? 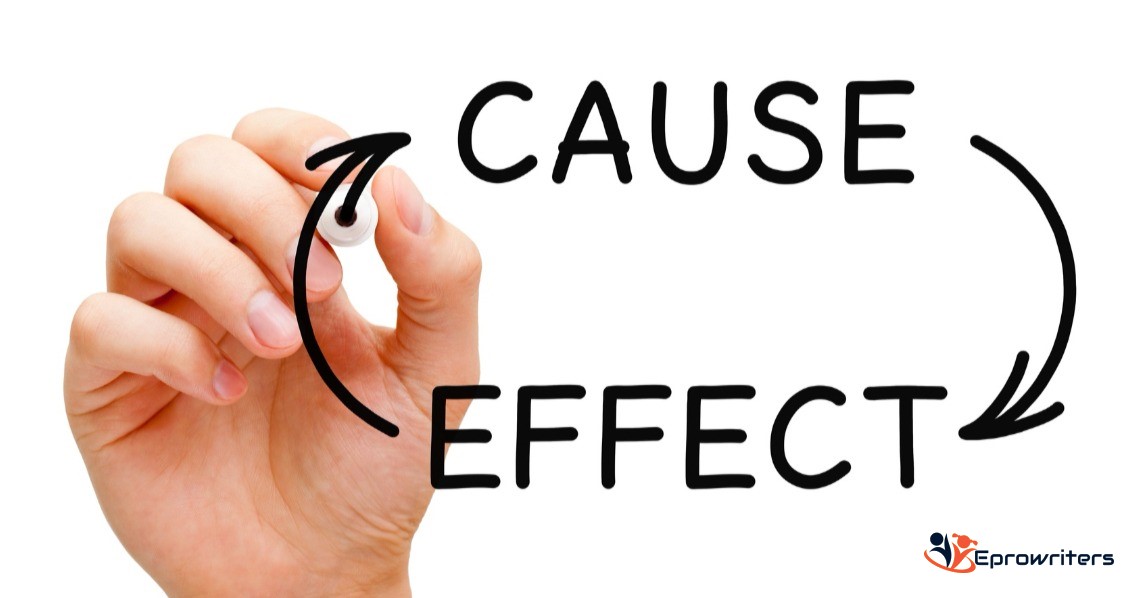 In writing, what is the purpose of cause and effect?

The desire to know "why?" and "how?" is generally considered human nature. We'd like to know how our child became ill so we can better prevent it in the future, or why a colleague was given a pay raise because we'd like one as well. We want to know how much money a hybrid car will save us in the long run, or how long we will live if we exercise every day. These are just a few of the relationships we consider in our daily lives, but they all demonstrate the necessity of knowing cause and effect.

Read also: What Is A Précis?

A cause is something that causes an event or condition, whereas an effect is something that happens as a result of that event or circumstance. The goal of a cause-and-effect essay is to figure out how distinct events are related in terms of their causes and effects. The link between cause and effect is sometimes obvious, but identifying the specific relationship between the two is often difficult. A sore throat, a runny nose, and a cough, for example, are plainly identifiable symptoms of a cold. Determining the etiology of the illness, on the other hand, can be a lot more challenging. A number of factors could have contributed to the illness, and to make matters more complicated, these factors could have combined to produce the illness. That is, any given effect could be caused by multiple causes. As a result, cause-and-effect talks are sometimes convoluted, resulting in debates and fights.

Take advantage of the complicated nature of cause and consequence. Finding the specific cause of an occurrence or naming the particular outcome is not always required or even attainable. As a result, you can claim one of several causes or effects as the principal, or main, cause or effect while writing a thesis. You've created a thesis when you suggest that one cause or consequence is more important than the others.

Read also: How to Write a Personal Narrative Essay

What Characterizes a Good Cause and Effect Essay?

Have you run out of ideas for your cause and effect paper?

It's crucial to select if you want to create an informative or persuasive paper. Keep in mind that there are certain factors that are indirect or distant. Other factors come into play much later. In other words, such a report should provide a thorough, objective explanation of occurrences based on empirical evidence.

A Cause and Effect Essay's Structure

The cause-and-effect essay begins with a broad introduction to the topic, followed by a thesis statement that identifies the primary cause, primary effect, or several causes and consequences of a situation or event.

The cause-and-effect essay can be structured in one of two different ways:

Regardless of the structure you choose, make sure to clearly and totally explain each section of the essay. Scientific studies, expert testimony, data, and stories are all useful tools for explaining complex relationships.

Cause-and-effect essays frequently use words and phrases that suggest linkage since they determine how phenomena are linked. Transitional words and phrases help the reader stay on track with the story's progression.

The conclusion should bring the debate to a close and restate the thesis, leaving the reader with a clear comprehension of the relationship under consideration.

Be wary of speculating on the basis of nothing. In writing, speculation is nothing more than unsupported guesswork. Because of the complexities of discovering relationships between things, writers are particularly vulnerable to such trappings in cause-and-effect arguments. Make sure you have solid evidence to back up your assertions.

Other distinguishing characteristics of a good cause and effect paper

Similarly, if you're looking into why women stay in violent relationships, keep in mind that things like falling in love can physically blind a person to important issues like being in an abusive relationship.

There are a variety of causes in some circumstances. Some events, in reality, cannot be described by a single cause. For example, if a student decides to study law, the following factors may have played a role in that decision:

When discussing a cause and effect study, be sure to specify whether you're talking about the cause, the consequence, or both. In reality, in order to avoid confusion, this should be stated clearly early on in the writing process. In relation to this, make a good outline that will lead you through the writing process and stick to it.

A list of all the possibilities should be included in the outline, arranged in order of priority and strength. Make sure you're aware of the current trends, events, and phenomena. However, begin with a broad remark and then narrow it down.

All of the paragraphs are connected by the conclusion. It should not, however, rehash what has already been covered. You can, on the other hand, conduct new research. For example, if you're talking about the causes and effects of a recession, you could talk about a hypothetical recession and compare it to previous ones.

Nonetheless, the words and phrases below can assist you in identifying causes and effects:

The greatest technique to find a reason is to inquire as to why something occurs. Asking what happened after something has happened is the greatest method to identify an effect. In general, a good cause and effect paper should attempt to comprehend a phenomenon, explain it, and provide an educated prediction of the outcome.

Related: Make Yourself a Literary Hero by Writing an Autobiography

An example of a Cause and Effect Essay provided by Lumen Learning is as follows;

Video game addition is a serious problem in many parts of the world today and deserves more attention. It is no secret that children and adults in many countries throughout the world, including Japan, China, and the United States, play video games every day. Most players are able to limit their usage in ways that do not interfere with their daily lives, but many others have developed an addiction to playing video games and suffer detrimental effects.

An addiction can be described in several ways, but generally speaking, addictions involve unhealthy attractions to substances or activities that ultimately disrupt the ability of a person to keep up with regular daily responsibilities. Video game addiction typically involves playing games uncontrollably for many hours at a time—some people will play only four hours at a time while others cannot stop for over twenty-four hours. Regardless of the severity of the addiction, many of the same effects will be experienced by all.

One common effect of video game addiction is isolation and withdrawal from social experiences. Video game players often hide in their homes or in Internet cafés for days at a time—only reemerging for the most pressing tasks and necessities. The effect of this isolation can lead to a breakdown of communication skills and often a loss in socialization. While it is true that many games, especially massive multiplayer online games, involve a very real form of e-based communication and coordination with others, and these virtual interactions often result in real communities that can be healthy for the players, these communities and forms of communication rarely translate to the types of valuable social interaction that humans need to maintain typical social functioning. As a result, the social networking in these online games often gives the users the impression that they are interacting socially, while their true social lives and personal relations may suffer.

Another unfortunate product of the isolation that often accompanies video game addiction is the disruption of the user’s career. While many players manage to enjoy video games and still hold their jobs without problems, others experience challenges at their workplace. Some may only experience warnings or demerits as a result of poorer performance, or others may end up losing their jobs altogether. Playing video games for extended periods of time often involves sleep deprivation, and this tends to carry over to the workplace, reducing production and causing habitual tardiness.

Video game addiction may result in a decline in overall health and hygiene. Players who interact with video games for such significant amounts of time can go an entire day without eating and even longer without basic hygiene tasks, such as using the restroom or bathing. The effects of this behavior pose significant danger to their overall health.

The causes of video game addiction are complex and can vary greatly, but the effects have the potential to be severe. Playing video games can and should be a fun activity for all to enjoy. But just like everything else, the amount of time one spends playing video games needs to be balanced with personal and social responsibilities.

Eprowriters.net is an afilliate blog of Eprowriters.com, a custom essay writing service that has been providing academic support with great success for more than five years. We are constantly updating our objectives in order to improve the quality of service we deliver and increase client satisfaction. We've progressed to an original concept as a result of our success. Our years of experience, consumer input, and market resources have resulted in the formation of Eprowriters, a one-of-a-kind online academic assistance business that allows customers and writers to collaborate directly in chat to create a mutually satisfactory final product without the intervention of a third party or support team. The benefits are self-evident: our customers may manage their orders autonomously from start to finish. Working in the field of academic support for a long time has taught us that no one can manage orders as well as our clients.